This is the first part of a multi-part post explaining how to build electrical layers in ships for Floating Sandbox.

Note: this tutorial has been updated on 09/06/2020 to cover the new electricals materials that have been added to Floating Sandbox in version 1.15.

One of the major new features introduced with Floating Sandbox 1.14 is the ability to create complex circuits sporting a number of different components – switches, engines, horns & bells, and so on. While for a few ship builders there’s nothing special in the way these components must be placed in a ship, for the vast majority of Floating Sandbox users out there this is a novel topic. This post attempts to provide an introduction to creating electrical layers in existing ships, while a subsequent post will walk-through the task of placing “advanced” elements and laying them out in a neat electrical panel, just like this: In this post we’ll assume you’re starting from a plain, structure-only ship image just like the following one – feel free to download it and use it as we walk through this tutorial:

Right-click on this ship, choose “Save image as”, and save it on your computer, making sure to name the new file “my_ship_structure.png“. This will be your structural image, i.e. the image that provides Floating Sandbox with the solid particles that make up the structure of your ship.

As you should probably know by now, each pixel in the structural image above corresponds to a particle, and the color of that pixel indicates the “material” that the particle is made of, based on a large “map” of color↔material correspondences – the “material palette”, which you may find under the Guides folder of Floating Sandbox. This is the full material palette at the time of writing (1.15): 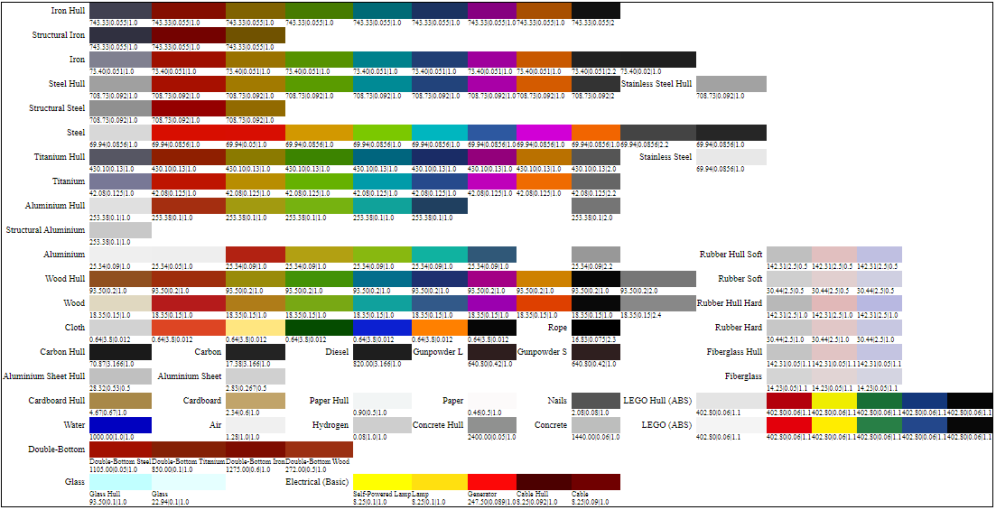 Now that you have a structure for your ship, it’s time to take it to the next step: you need to transform this ship from a “basic” ship to an “advanced” ship, which is capable of using multiple images to provide different ship characteristics to Floating Sandbox. An “advanced” ship may in fact provide many things, such as ropes, high-definition images, and electrical element information.

To create an advanced ship, create a text file in the same folder in which you have just saved “my_ship_structure.png”, name the text file “MyShip.shp” (make sure you get rid of any other parts of the filename, such as “.txt“), and paste the following text into it:

Let’s test this out! Start Floating Sandbox, click on “Load Ship”, and navigate to the folder in which you have saved the structure image and the text file above; you should see your ship twice now: 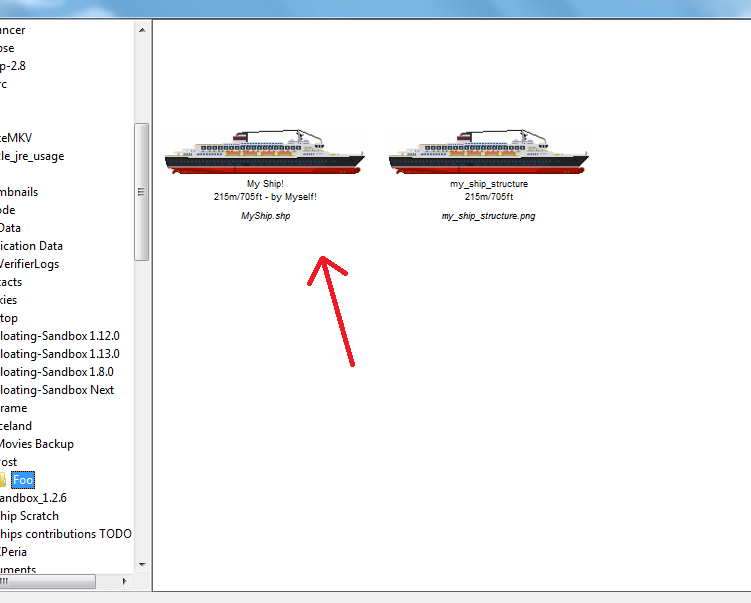 You can now load your “advanced” ship and play with it, but you’ll notice that it’s not that different than the initial “basic” ship – it’s exactly the same ship in fact. That’s because we’ve only specified a structural layer.

The palette containing the game’s electrical materials is under the Guides folder, and at the time of writing it contains the following elements:

Let’s do just that then!

Save your new image as “my_ship_electrical.png” and you’re done – this is your first circuit!

We now have to tell Floating Sandbox that this circuit belongs to our ship. We do so by editing the “MyShip.shp” file and adding an “electrical image” directive to it:

Open up the ship in Floating Sandbox, and you should now have a bright lamp close to the bridge of your ship, exactly as follows:

These are the rules to follow when drawing an image for the electrical layer of a ship:

View all posts by Gabriele Giuseppini